What’s The Difference Between Wasps and Yellow Jackets? 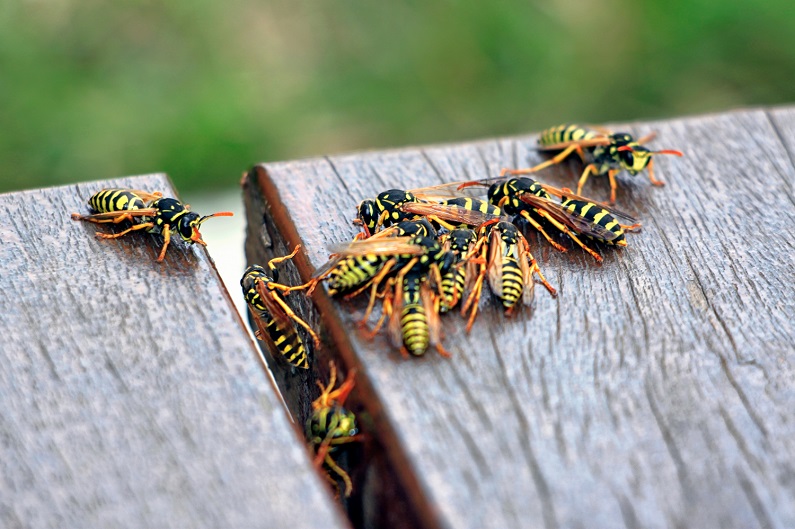 While most view these pesky bugs as troublesome, they truly help the environment with pollination and control the bug population in gardens across the globe. Now that we have that out of the way, we know that no one wants wasps or yellow jackets around. Children run screaming, adults avoid the areas that they lurk, and animals can certainly feel their wrath too. At first sight these two insects look the same, but there are quite a few differences to note. First, both fall under the Hymenoptera order, meaning both bugs are wasps. Yellow jackets are just more social wasps. Great, right? While they act similar, let’s look at some ways to tell them apart (So you know when to not be social back).

As previously stated, yellow jackets are the less friendly of the two species. To say the least. They will attack unprovoked due to their Vespula and Dolichovespula geneses, or what we call the evil gene. So let’s figure out how to avoid them (or both, both would be better).

Most people think wasps are solely yellow and black, but this is not always the case. They have a far greater variation in color depending on the species. keep an eye out for not only yellow, reds, oranges, and blackish blue insects hovering around your summer cookout. Yellow jackets typically stick to their yellow and black appearance. A key to telling them apart lies in their antenna and wing color. Wasps tend to have yellow and black appendages, while yellow jacket’s are darker. However, overall yellow jackets are more yellow while a wasp’s colorations are darker to help with differentiation.

While we don’t recommend anyone get a good look at these two, unless you’re us, you can also tell wasps and yellow jackets apart by their body shapes.  Overall yellow jackets are smaller and stockier than their partner in crime. Yellow jackets are typically between 0.5 and 0.75 inches long and have quite a thickset frame.  However, wasps are longer ranging up to 1 inch long, but are more slender and have a noticeably thinner waist.

When the two insects are flying, there is also a notable difference. Yellow jackets carry their legs underneath them when they are flying but wasps leave them dangling. We would say avoid both, but if you see a Cheeto puff size object flying at you like a torpedo, it’s probably a good idea to clear the area and check for nests ASAP.

Nest style is always a good indicator of which bug you are dealing with. Wasps usually nest above ground on structures like eaves, beams, or roofs. Their shape can differ between a honeycomb appearance and a large upside down cope structure. Paper wasps are known to create the honeycomb textured nests. They use saliva and wood fiber collected from plants to build their structures that they nest in. When fully mature, they can contain up to 200 cells! Since her nest is fragile, the queen is always on the lookout for a human or pet disrupting it. Since the nest is her kingdom, she will protect it at all costs. These wasps usually hide during the day and hunt at night and they eat caterpillars and larvae, similar to yellow jackets.

Surprisingly, yellow jackets nest underground in protected places such as tree stumps, burrows, or soil cavities. Their nests can be hard to spot because of their tricky locations and they usually only have one opening. Be careful which trees your little ones are climbing this summer!

Lastly, it is again important to acknowledge the biggest difference in their behavior: aggression. Yellow jackets can be extremely combative and even sting even when unprovoked. If their nest is threatened they will attack as a swarm, and trust us that is not fun. Not at all. Wasps are generally much more docile and prefer to avoid humans (perfect). However, naturally, they will still attack if their nest is being threatened.

To avoid any of these altercations with insects sporting a stinger, give us a call today for all of your pest control needs! At Priority Pest and Mosquito Solutions we have over 10 years of experience and offer top of the line customer care with personalized pest control plans to fit your insect and rodent extermination needs. Don’t let yellow jackets and wasps get in the way of enjoying your summer in Oklahoma!